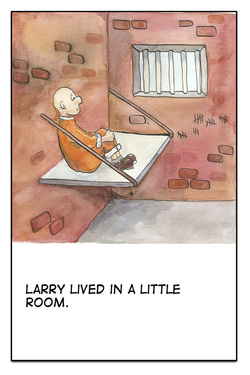 Larry the Lifer is a prison inmate who is in jail because he failed to learn life's basic lessons in his childhood. I had planned this to be a book series, designed and written as children's books and containing the same type of lessons one might find in such stories, only applied to a man serving a life sentence and directed at adults. The theme is 'Because you failed to learn the first time around...'

A friend of mine did a few sample illustrations for me. I sent them to an agent. She said she liked them but that they were not the type of book she normally dealt with (she was an agent for children's books, not parodies). Still, I think it's a fun series. You will notice that the pictures add to the story taking place in the text. I have actually planned a segment called 'Where's My Shiv!?!' told almost entirely through pictures, based on the children's book 'Stop That Ball!'. Sadly, my artist was only able to do a handful of pictures for me. Below is the first Larry book, along with the sample pictures, which were done in watercolor.

What's in a Name?

Larry lived in a little room.

He had a roommate named Rhino.

They lived next door to Pyro and Mauler.

Ice Pick and Stitches lived across the hall.

Rhino and Pyro and Mauler and Ice Pick and Stitches weren't their real names.

It seemed everyone in the cell block had an interesting nickname.

But Larry was just Larry.

“Maybe I should choose a nickname,” Larry said to Rhino.

“You can't choose your own nickname,” Rhino told him. “Other people give it to you!”

“Could you give me a nickname?” Larry asked.

“No,” said Rhino. “It's not like that! People will see something special about you, and then they will give you a
nickname.”

No one had ever given Larry a nickname.

'I must not be special,' he thought sadly.

What could he do to earn a nickname?

What was special about Larry?

The next day Larry played baseball in the yard.

Maybe he could hit a home run! Maybe someone would name him Slugger or Grand Slam!

But he struck out.

Later he went to the gym.

Maybe if he lifted a lot of weight someone would name him Muscles or Brawny!

But he couldn't even lift Rhino's towel off the bar.

He thought long and hard all day long.

He couldn't eat enough steak to be called T-Bone.

He couldn't run fast enough to be Speedy.

Larry didn't think he was special at all.

Then Larry got a present from his mom.

He didn't need a nickname like Strongman or Tough

Larry was Larry – and that was special enough.

A Friend in Need
The New Warden
Powered by