THE FEDERATION OF SOL 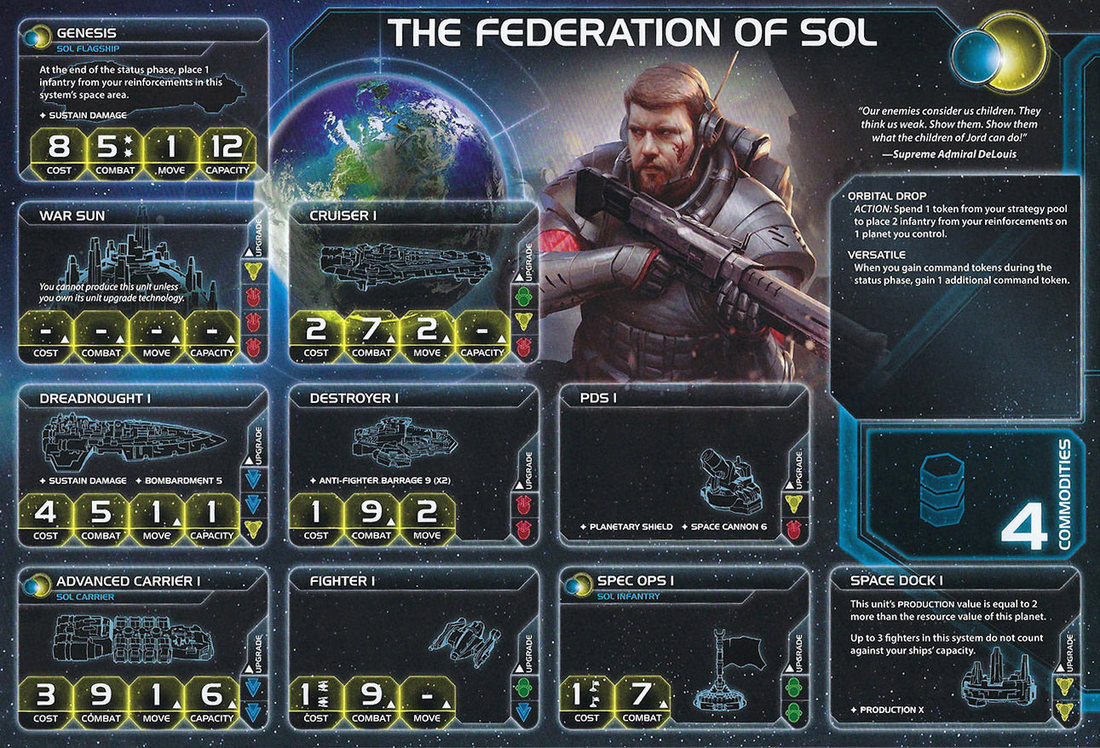 Ah, yes, humans. What we don't know about this mysterious race could fill a library. What I have gleaned, through hours of perusing their entertainment networks, is that they are exceptional problem-solvers with the ability to consistently resolve personal problems in twenty-two minutes.

The Federation of Sol, if you haven't heard, represents we humans. Sol is the name of our sun, and Jord (the Federation's starting planet) is the name of Thor's mother in Norse mythology, as well as the personification of Earth. So yes, it was earth all along.

I have gained more respect for the humans as a race in TI3. As humans in our reality have declined over the years, so has my respect for this fictional representation grown. They are a solid race for expansion, having babies and dropping them all over the galaxy.

This is a minor change from TI3, with Neural Motivators making a tag-in.

Advanced Carriers II - Carrier Capacity increased to 8 (and Speed to 2, as all advanced carriers). They also gain Sustain Damage.

Spec Ops II - Destroyed Infantry have a 55% of being replaced on home planet. That's them baby-making skills at work.

It is worth noting that humans start with better Carriers than other races, which is different from TI3. Most carriers now only have 4 capacity until they advance, when they get 6. Human carriers start with 6 and Advance to 8.

GENESIS
Sustain Damage
At the end of the Status Phase, place 1 infantry from your reinforcements in this system's space area.
Cost: 8  Battle: 2 dice at 5+  Move: 1  Capacity: 12

A bit of a change from the infinite capacity ship from TI3. A but more realistic, if you ask me, and still a large enough capacity that none of you have any right to complain!
<-- Back
Powered by