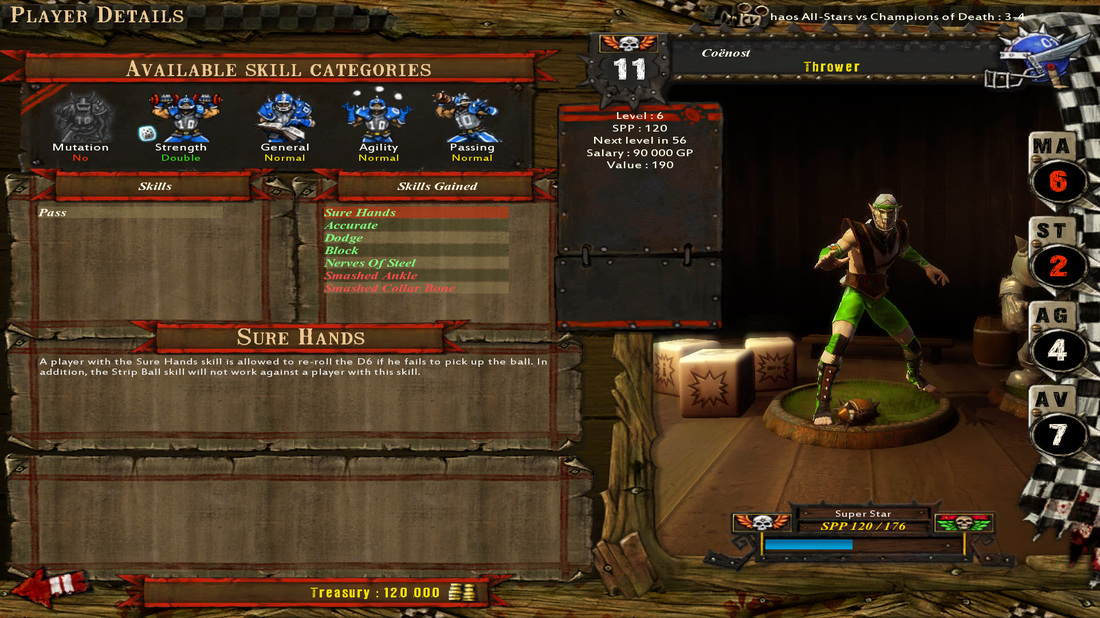 For my explanation of the Blood Bowl Character screen I'm using one of my Throwers from a Wood Elf team. He has a good mix of skills and injuries to help guide this along. 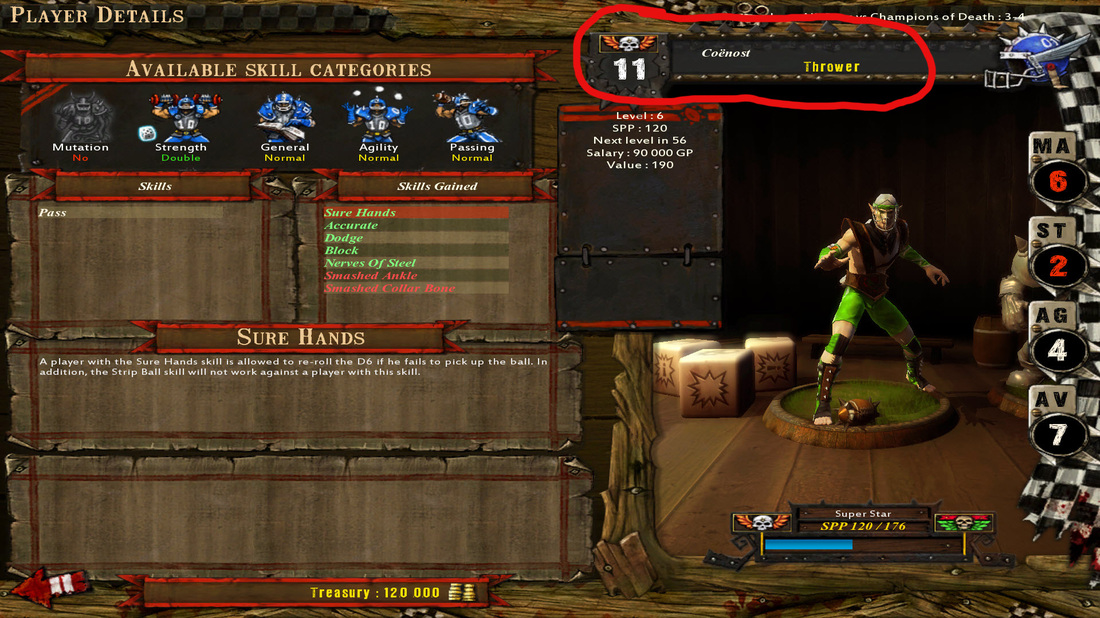 Lets take a look at the first field (circled in red). This field contains the player's name, player number, and position. This character is a Thrower, which typically means he starts with some ball handling skills. 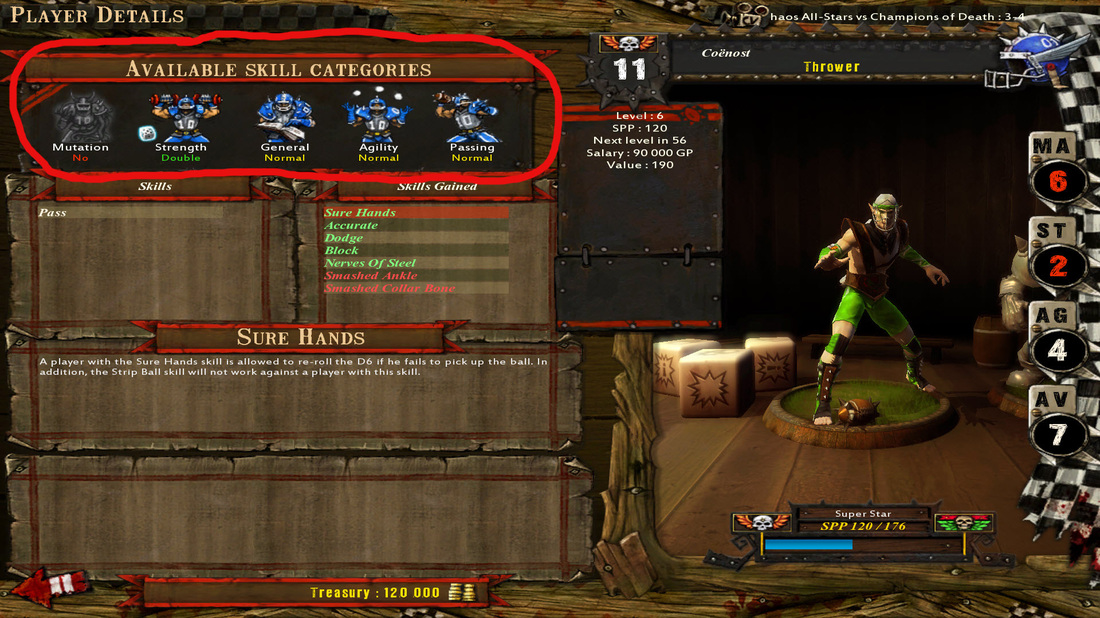 These are the Available Skill Categories. Every time a character goes up a level (earned by gaining Star Player Points, or SPP) two dice are rolled and the character can gain an ability or skill depending on the number rolled. Let's take a closer look at this field.

There are five skill categories: Mutation, Strength, General, Agility, and Passing. Not all characters have equal access to each field. The fields marked Normal are freely available. No matter the die roll, a character can always select a skill from a category labeled Normal. You'll notice Strength says Double. This means my Wood Elf Thrower must roll doubles on the level up roll if he wants to select a Strength skill. Mutation simply says No. A Wood Elf Thrower can never take a Mutation. 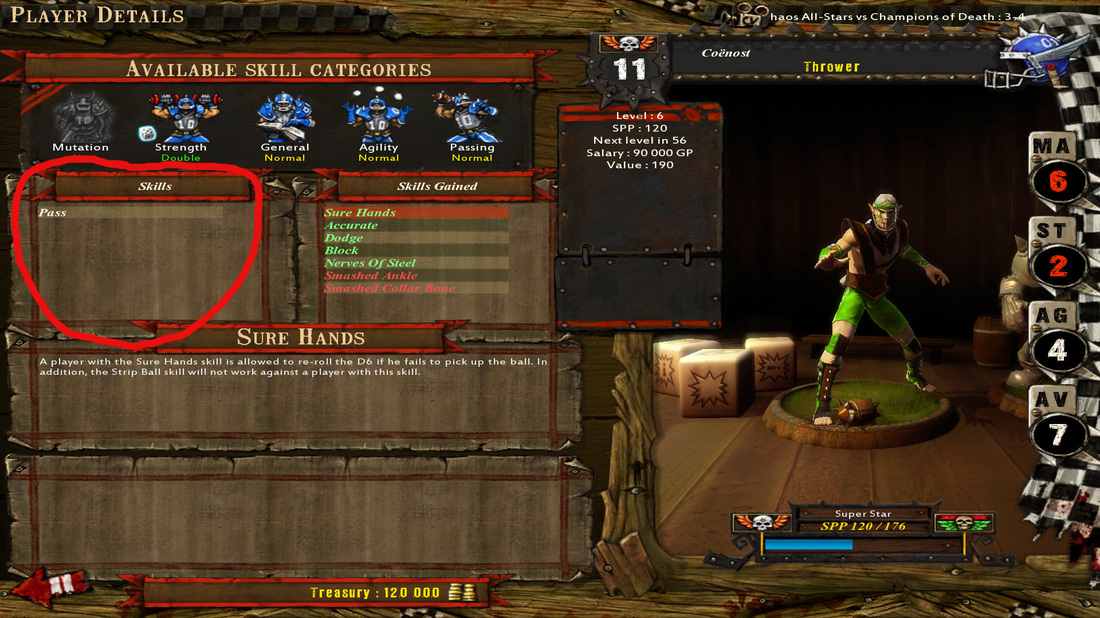 There are two skills columns. The first is the skills that a character starts with. 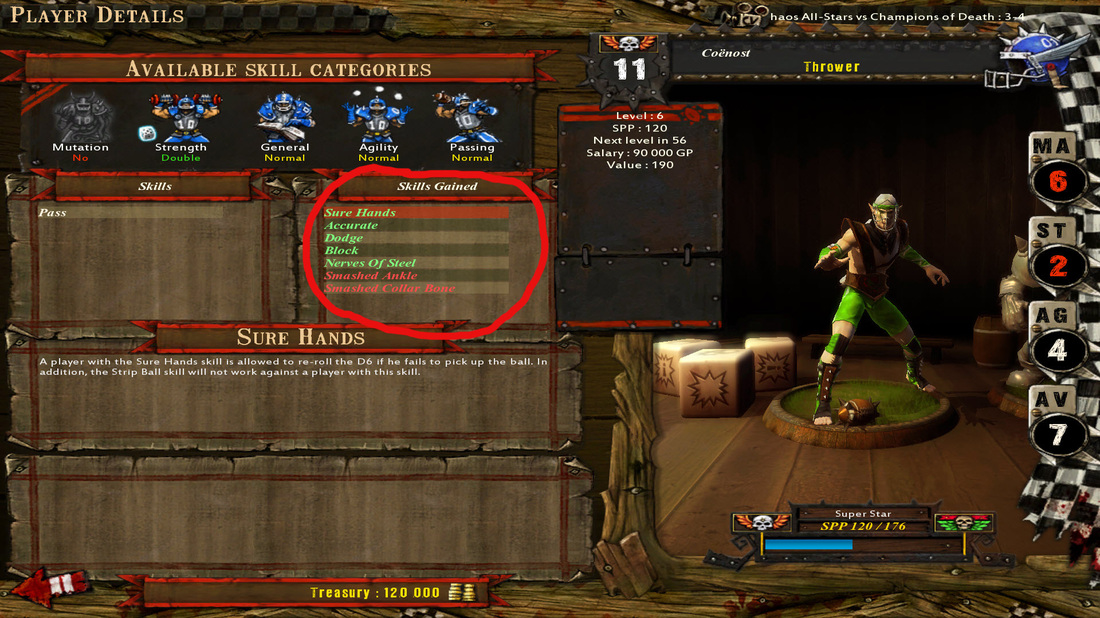 Skills Gained are the skills taken as the character leveled up. Notice there are two skills written in red. These are actually injuries that have a permanent effect on the character. This poor Thrower has suffered a Smashed Ankle and a Smashed Collar Bone in his career. I'll talk about the affects of these injuries later. There are also other injuries with different effects that can be sustained.

Here's a closer look at the Skills fields. The Thrower started with Pass, which is typical for Throwers. This means if the character fails a Pass roll, he gets an automatic reroll. On the right, in Green, are the skills I gave the character as he leveled up. Sure Hands lets him reroll if he fails to pick up the ball. Accurate gives him a bonus to his pass roll. Dodge and Block are for his own protection-they make him harder to knock down and make it easier for him to escape from opponents. Nerves of Steel lets him ignore enemy tackle zones when playing the ball. And, of course, there are his two injuries listed below. 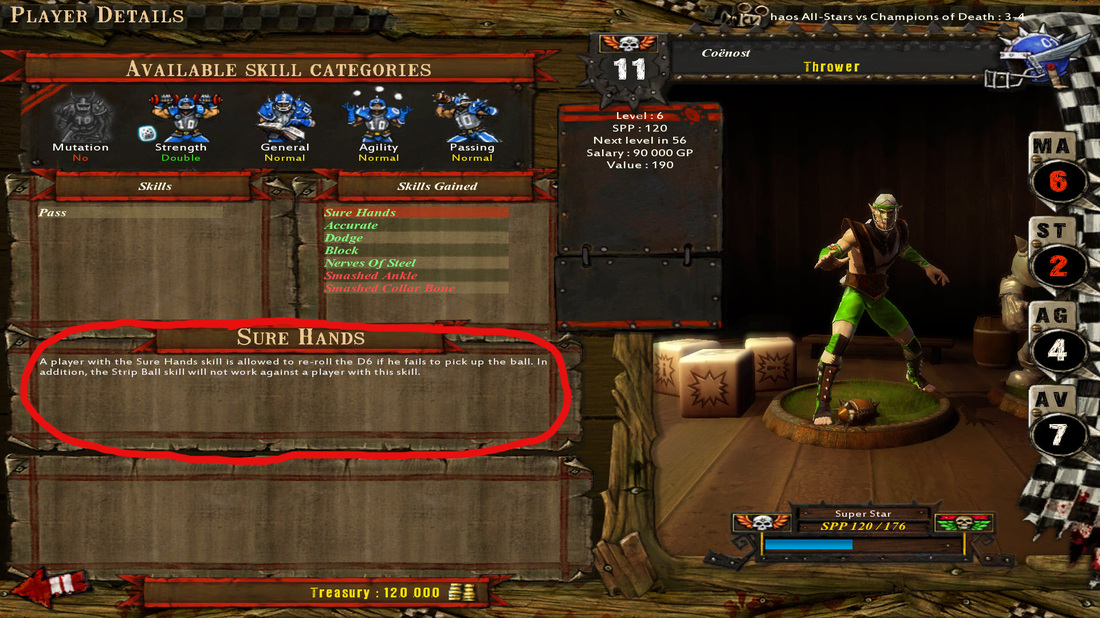 The section circled here explains the highlighted skill. So if you don't know what something does, just click on it. 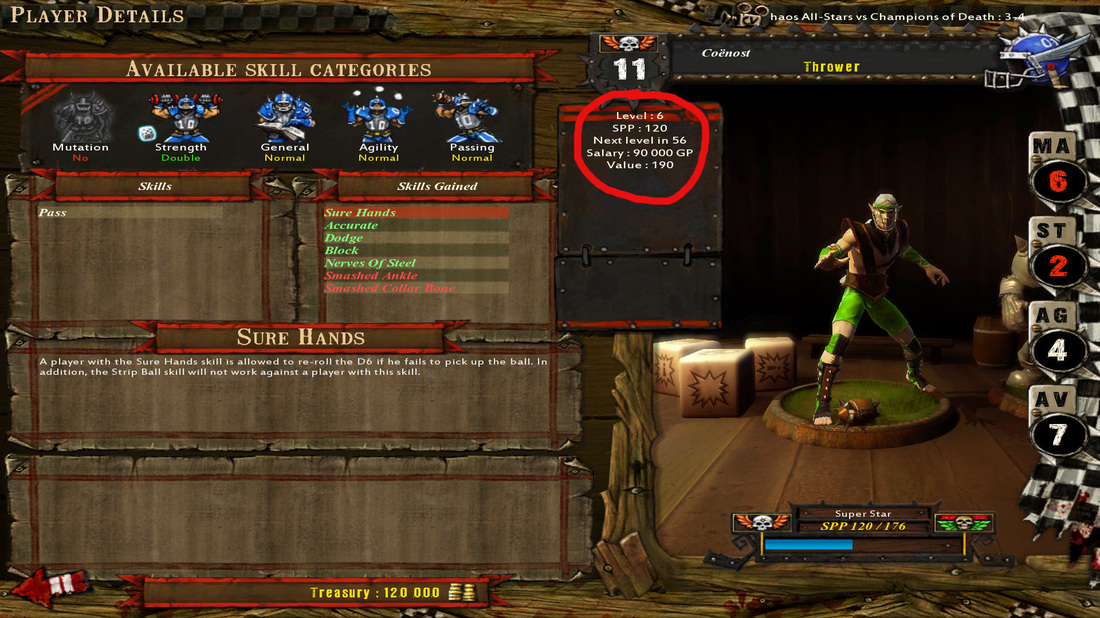 This box contains the player details. Let's zoom in. 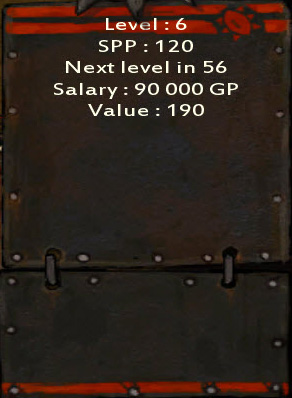 This player is Level six out of a maximum of seven. He has 120 Star Player Points. If you look at the bottom of the screen (look at the circled portion in the picture below), you'll see a blue bar which lists the Player's status (Super Star), current SPP of 120 and a second number, which represents the number of SPP needed to go up to the next level. In the box above you see it says 'next level in 56'; so it did the math for you and tells you how many points you need to level up. Next is the characters Salary (the amount you bought him for) and Value. Value is important as is contributes to the Team Value (higher team value means you have to pay more maintenance costs, and allows inducements for opposing teams with a lower value). My player has a Value of 190. He started at Value 90: 1 per 1000 Salary. But whenever he levels up he gains Value. I don't know if his injuries affected his value or not. 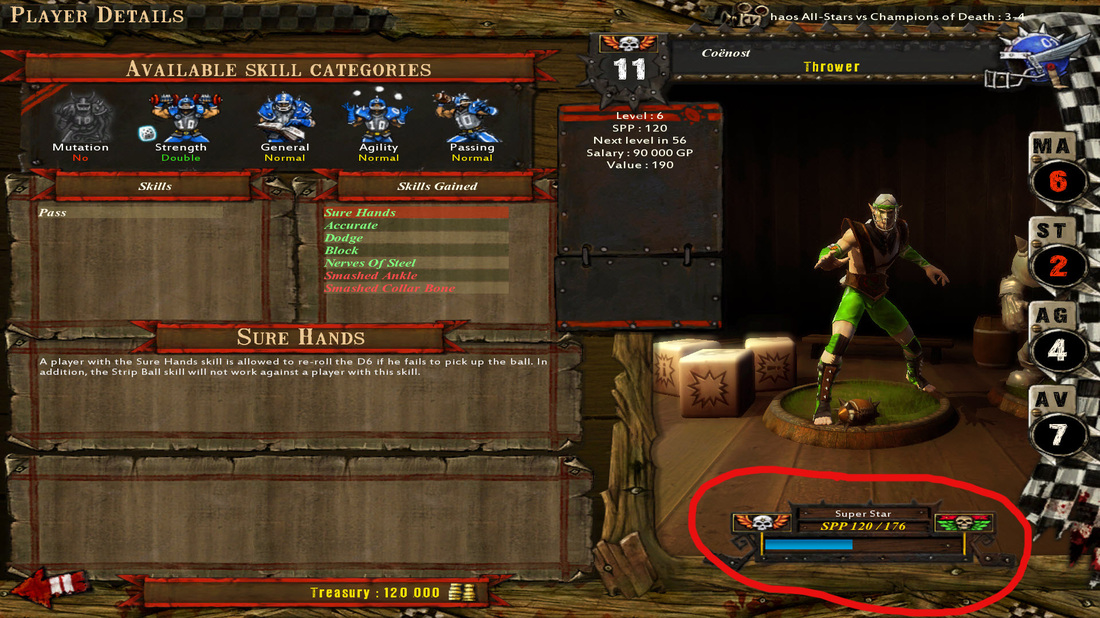 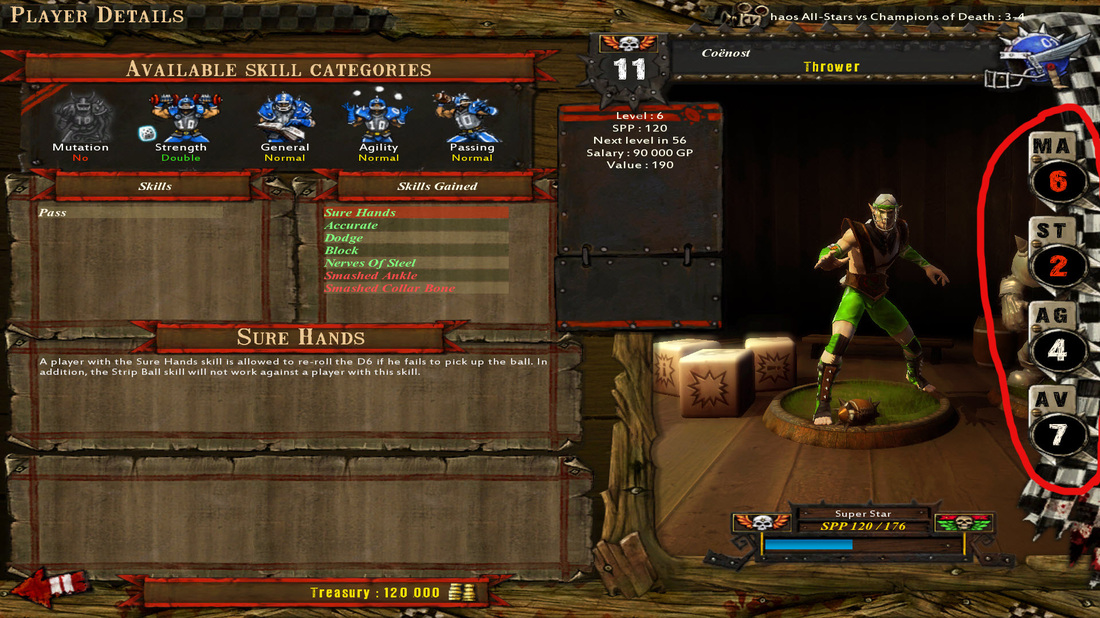 Finally, let's look at the player's Abilities. There are four Abilities: Movement Allowance (MA), Strength (ST), Agility (AG), and Armor Value (AV). Movement Allowance is how many squares the character can move (though a character can Go For It, which means he can try running up to two more squares but risks falling over). Blocks are determined by the relative Strengths of a character. If a character blocks a character of equal strength, one die is rolled to determine the result. If one character is stronger, two dice are rolled and the coach of the stronger player chooses the result. If one character is more than twice as strong, three dice are rolled. Other players can affect the relative strength of the two characters involved in the Block. Agility is rolled to handle the ball and dodge away from opponents, and Armor Value determines how difficult a character is to injure if he is knocked down.

In the case of my Wood Elf Thrower here, you can see his Movement Allowance  and Strength are both red. This is because of his injuries. His Smashed Ankle reduced his Movement by 1, and his Smashed Collar Bone reduced his Strength by 1. Sometimes you'll see a number in Green. This means a player had a permanent increase to an ability when he leveled up. This is a result of rolling very high (10+, I believe).

Hopefully this gives you a but of a better understanding of how to read the player screen. I will be posting a screenshot of each type of player in the team section of the we page.
<-- Back
Powered by