I have always been interested in trying to make and customize my own games. Part of the issue I've had in making them is manufacturing cool pieces. Originally I tried my hand at casting in pewter. I was ok with the wax carving (not great, mind you) but got lost with the casting. But then I found out about 3D printing.

If you are not familiar with 3D printing, it is a special printer stocked with (usually) plastic which takes a 3D model from your computer and creates it. There are different ways in which this can happen, depending on the printer, but usually it involves the 3D printer laying down thin layer upon thin layer of the model.

There has been some news on 3D printing lately because of people using it to make guns; I'm absolutely not going into that here. My focus is simply on game miniatures. Anything you want made in customizable plastic can be made, as well as metal, sandstone, and even chocolate, depending on the printer. There is even a car on the way called an Urbee which is largely manufactured using 3D printed parts. (There is a link at the bottom of the page).

One problem I had with 3D printing was the lack of tutorials on how to prepare a 3D model for 3D printing. Now I don't have my own 3D printer yet, so I've been uploading my models to a site called Shapeways, a 3D printing site. But most of my models were either getting rejected or breaking in the printing process because I didn't know what I was doing. I'm still learning, but I am becoming a lot better at it and due to the lack of clear instructions I thought I'd make a tutorial so you can make your own 3D models and prepare them for 3D printing. I decided to do these as video tutorials because they're more fun to make. I uploaded the tutorials to Youtube so the button will route you there.
Tutorial Playlist on Youtube 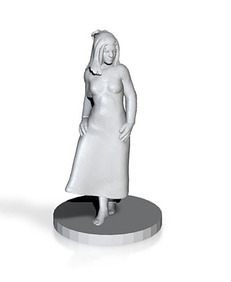 This is the miniature I make during the tutorial.
Also, I just wanted to show some of the other models I have uploaded. Not all are for sale (you can see those by following the link from the Home Page). Some are made from scratch; some are made using DAZ; and some are derived or modified from other people's meshes (don't worry, I made sure the licensing was ok for me to use them). The Xxcha fleet is almost complete but I need to fix up the Space dock and then some of the models are derived from the work of others and I need to get them properly credited. I have the names but need to sift through the collection and sort them out).

I've been working on making some of the Ground Forces for Twilight Imperium. I think I'm getting better! Here you go:
Powered by